Travel Beyond Our Borders

Ursuline students have many opportunities to travel internationally. The girls broaden their global perspective and also gain invaluable life-defining experiences.

One of the first stops by our group of juniors was at the Architectural Museum of Athens where students learned about Greek sculpture. The students also visited the Acropolis of Athens, the temple of Athena at the Acropolis and The Parthenon, a former temple dedicated to the goddess Athena, whom the people of Athens considered their patron. 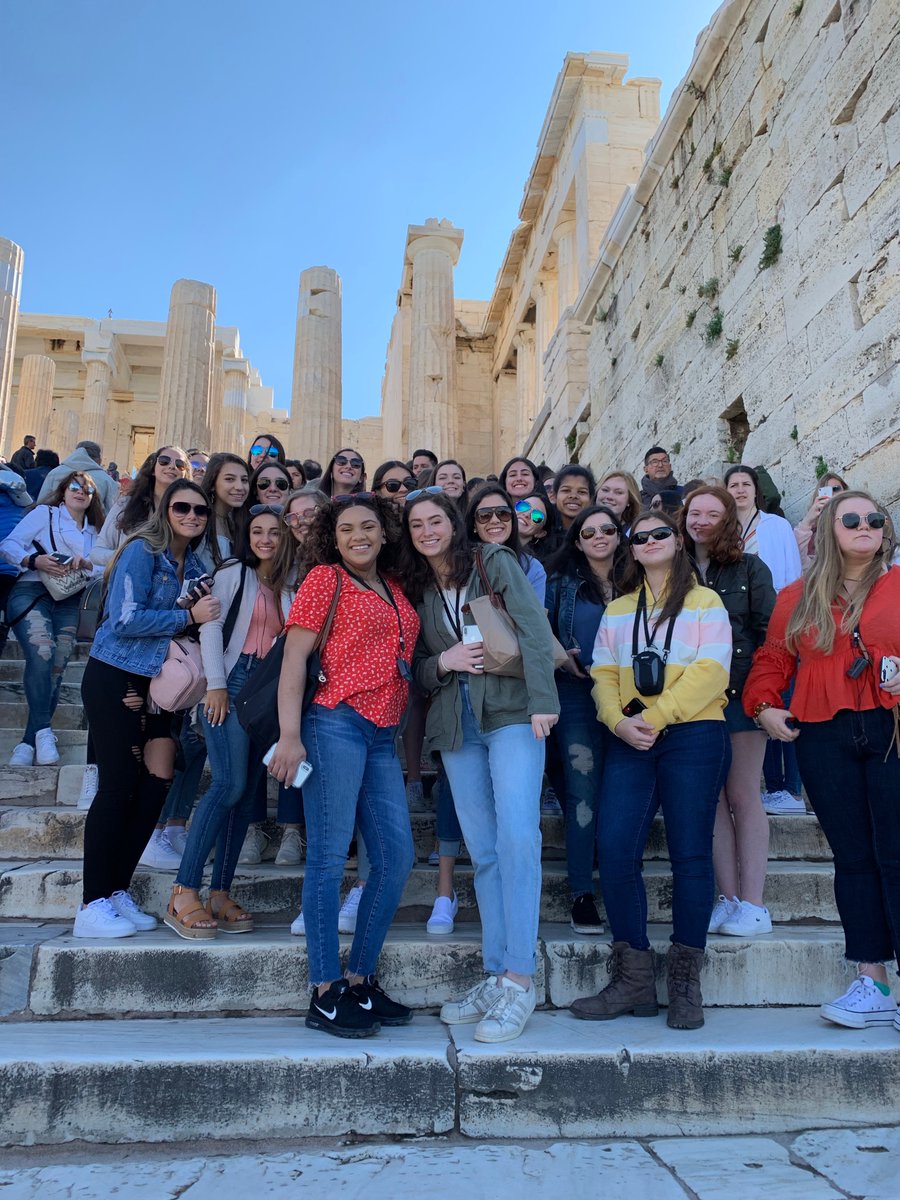 The group then traveled to Delphi, which ancient Greeks considered to be the center of the world. Their next exciting stop was Santorini, a beautiful island in the southern Aegean Sea. They enjoyed the Volcanic Island boat tour and visiting the excavation at the ancient city of Thira, the oldest known civilization on earth, dating back to 3000 BC.

Student ended their time in Greece with a visit to Cape Souion and the Temple of Poseidon, one of the major monuments of the Golden Age of Athens.

Over the February 2019 mid winter break, our eco scientists completed field research in the rainforest of Costa Rica and monitored sea turtles at Playa Blanca.

The students’ efforts were focused on Hawksbill and Easter Pacific Green turtles through in-water studies, data collection and work with rescue and rehabilitation. Work was also completed on the mangrove ecosystems in efforts to restore the tropical trees that thrive in conditions in which most other timber could not thrive. Mangroves are key weapons in fighting climate change because of their ability to store vast amounts of carbon.

The Paris Exchange was hosted by our sister school, Sainte Ursule,where they had a chance to work with the Special Learners in their ULIS program, leading a variety of games and activities. Our New Rochelle students visited many sites including Palais Garnier, home of the Paris Opera. They enjoyed delicious crepes and had their portraits drawn in Montmartre, the former artists' village once inhabited by Picasso and Dalí.

The Australian Exchange first explored Sydney. They climbed the Sydney Harbour Bridge and discovered Bondi Beach where they enjoyed a swim and viewed the magnificent cliffs. Bondi comes from the Aboriginal word "Boondi" which means "water breaking over rocks."  Then they flew to Toowoomba and were welcomed by St. Ursula College. 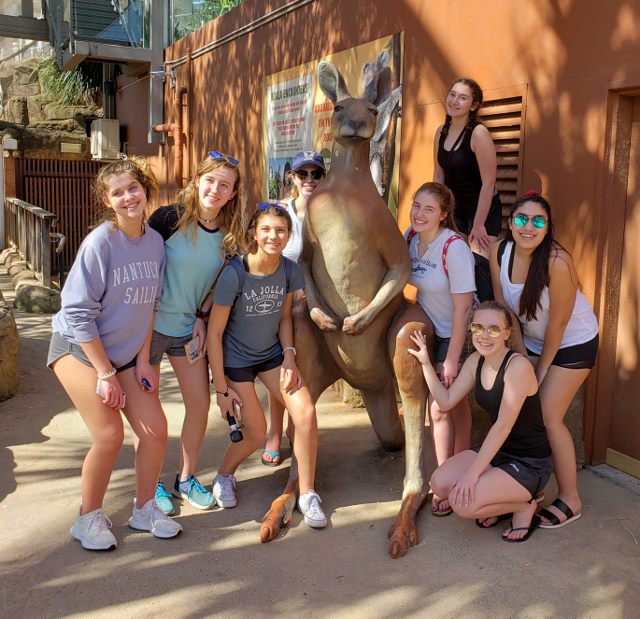 After a morning of Spanish classes, the Spanish Immersion students took a trip out of Seville to the ancient Roman city of Italica. They also visited the beautiful city of Segovia which features the third largest cathedral in Spain.  In Madrid, they had a wonderful visit to the Prado Museum where they saw the works of Francisco Goya and Diego Velazquez. An additional stop on their itinerary was Cordoba, an important Roman city and a major Islamic center in the Middle Ages.

The Italian Immersion students in Florence learned about that city’s rich history in gold artistry, dating back to 400BC when the Etruscans reigned. The group had the chance to go to some shops and have a special lesson on leather craft, gold stamping, and gold jewelry. Excursions outside Florence included the beautiful Basilica of St Francis in Assisi where they were treated to breathtaking views from the top of the mountain. The group also went to Rome.  They toured the Sistine Chapel and were amazed by seeing in person the works of Michelangelo as well as the Vatican Museum.

“The Junior European Trip to Spain was definitely the highlight of my Junior Year. In the course of 10 days, we managed to visit eight cities and two different countries. We immersed ourselves in the Spanish culture, learning new things and trying new foods every single day. My favorite parts of the trip were our time in Segovia and our time in Granada. Segovia is a centuries-old city, famous for a Roman aqueduct and beautiful Alcazar. The little city had such a charm, it was impossible to not be completely taken aback. Granada, another very old city, was rich with history and culture.“
Estefania Mendoza ‘19 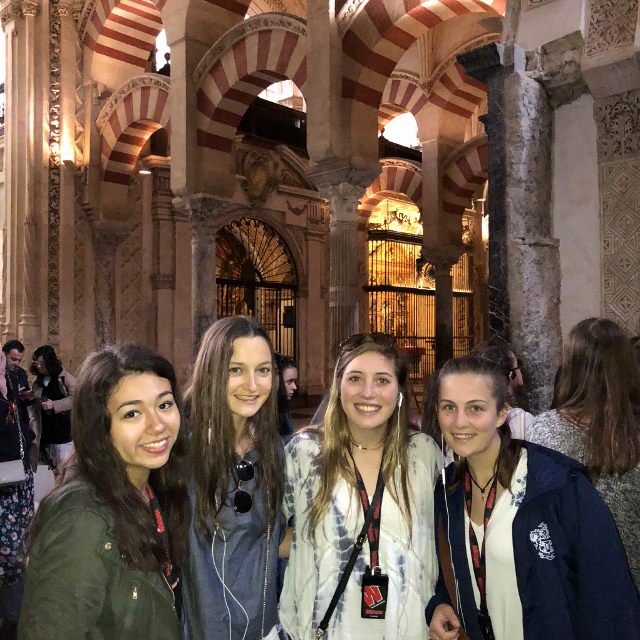 “I was very fortunate to be able to attend the 2018 Junior European trip to Spain. I had no idea how beautiful the country was until I saw it first-hand. My most memorable part of the trip was going to Seville. My favorites were the Seville Cathedral, which is the oldest Gothic cathedral, and the Metropol Parasol, which is the world's largest wooden structure. The flamenco dancers and the food were also a highlight!”
Tessa DeVivo ‘19 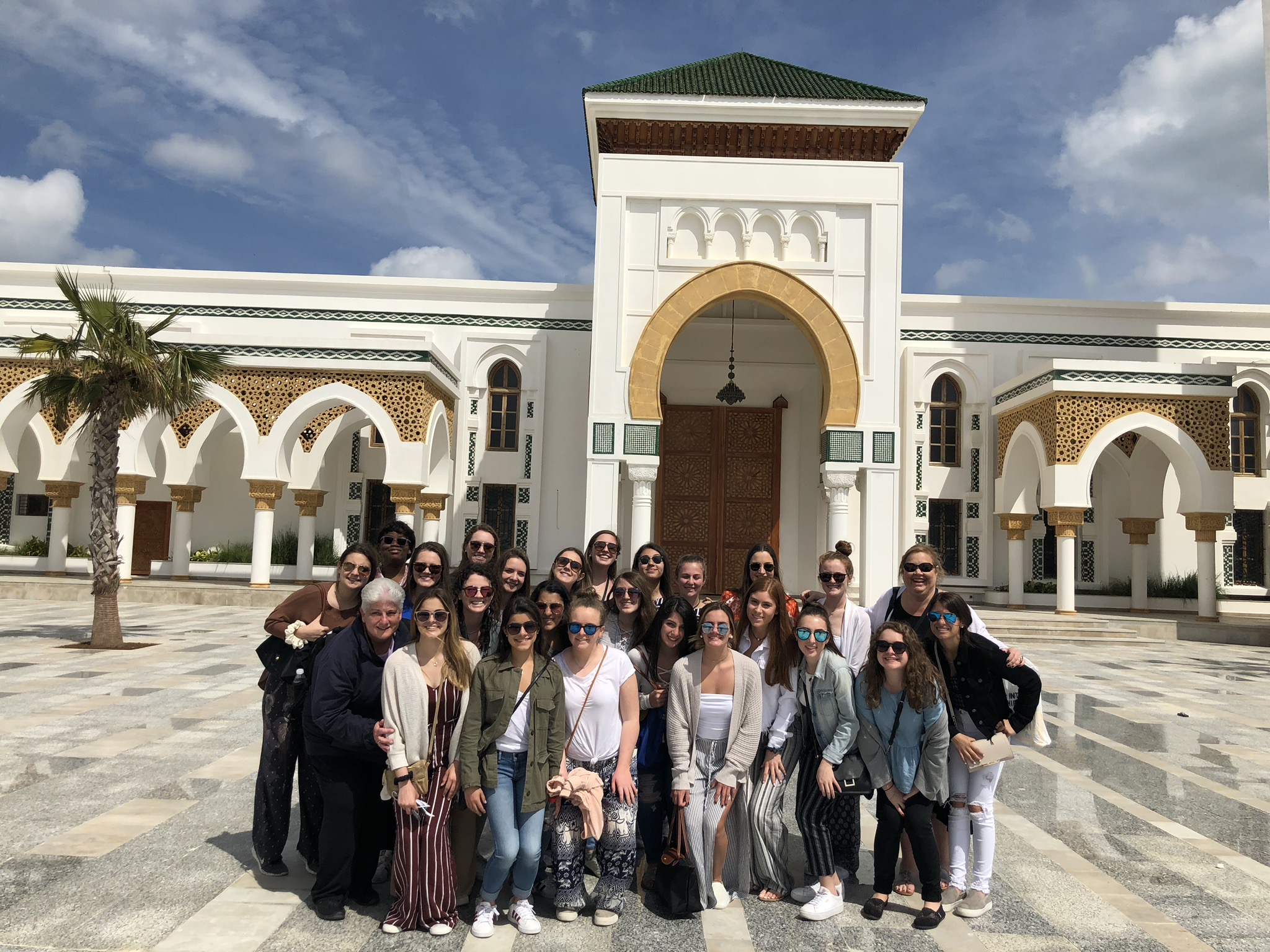 “One of my favorite parts of the trip was when we went to Morocco, for it was unlike anything I had ever seen before.  We started off the day by riding camels, which was an exciting experience.  Just when we thought the day couldn’t get better, we went to a Moroccan restaurant that saw a traditional Moroccan dance that featured several instruments.  This day stood out because it presented a different culture than what we were introduced to throughout Spain.”
Olivia DeLeo ‘19

The 20 high school students and faculty chaperones Pierce Wade, Brittany Johnson, and Maya Welch ’10 began their February 2018 Classics Trip in Rome by exploring the ruins of Ostia Antica with its labyrinth of funerary sites, temples, and storefronts. From there, they rode the bus to picturesque Nemi and its museum dedicated to the lost monumental yachts of Caligula. 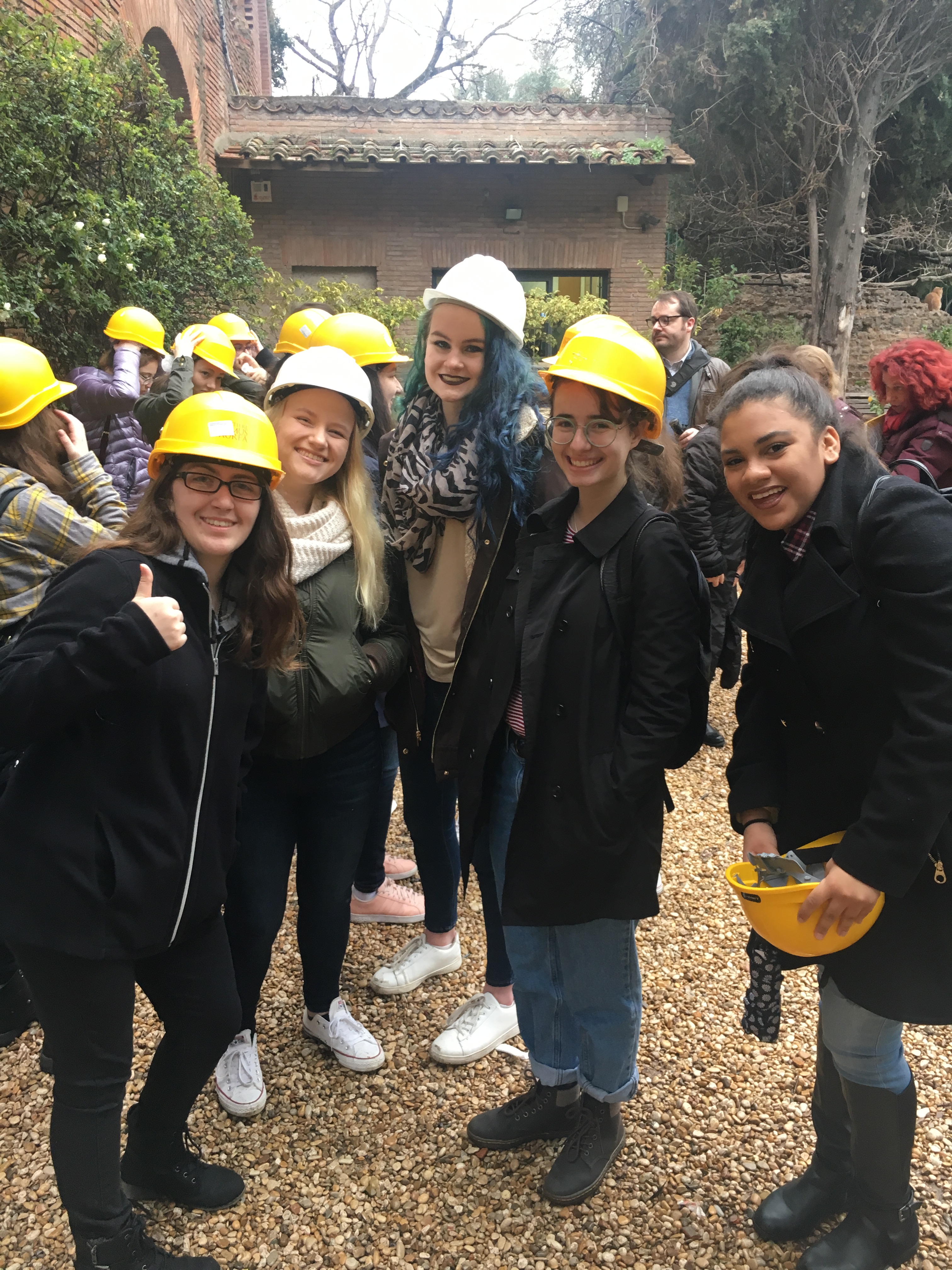 The following day at the Domus Aurea of Nero they donned hardhats to view an archaeological site that is still under restoration and excavation.

At the Colosseum and the Arch of Constantine, the group learned about the human costs of the Imperial construction, and on the Palatine Hill they traced Roman history from its first emperor back to its earliest foundations.

Each day offered the girls a chance to experience rich historical and artistic sites such as the Capitoline Museum where the art of classical antiquity rests cheek-by-jowl with the greatest achievements of the Renaissance and the Vatican Museum, including the splendor of the Sistine Chapel and the majesty of St. Peter’s Basilica, where they found the statue dedicated to St. Angela herself.

Our travelers experienced Italy by walking through the Baths of Caracalla, the largest surviving Imperial construction of its kind, on bicycle along the Appian Way, by ferry to Capri, site of the Julio-Claudian Emperors’ personal villas, and on a chairlift to the summit of Monte Solara. The girls enjoyed gelato and cappuccino at Piazza Navona and had fun learning how to make gnocchi from a local chef. 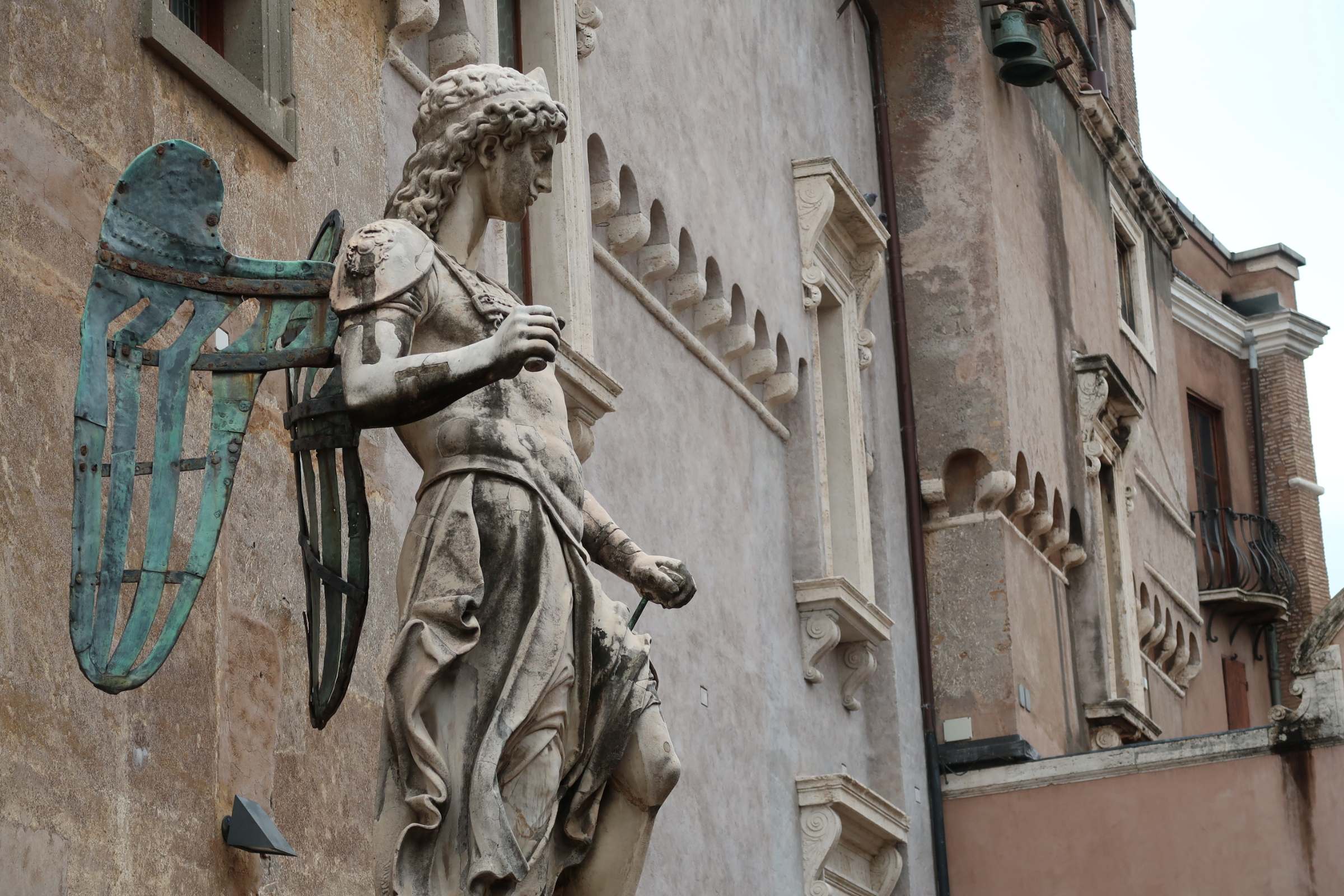 The Peru Exchange group was led by Mrs. Davidson and Ms. Welch. Our students were hosted by Ursuline students from Colegio Santa Ursula in Lima. A group of students from this "sister" school will visit us in New Rochelle in January 2018.

The group devoted two days to service in the remote countryside of Jicamarca where they helped with the construction of a building. Then the group visited Qorikancha, the most important site in the Inca Empire and also home to the Temple of the Sun. Another cultural highlight was the Natural History Museum (Museo de Historia Natural) in Lima, Peru's most important museum of natural history. 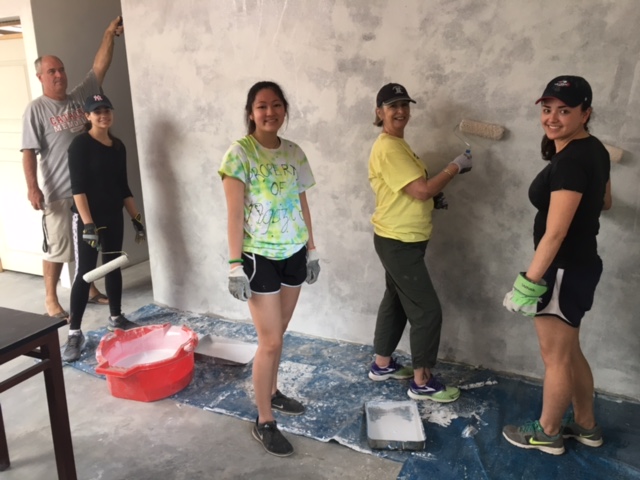 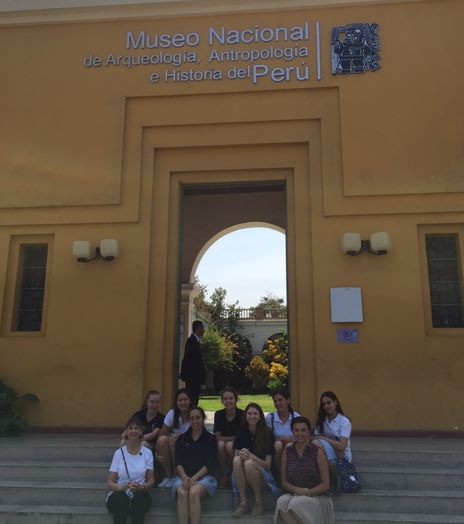 On Easter Sunday, our group attended Mass celebrated by Cardinal Cipriani at the Cathedral Basilica in Lima. 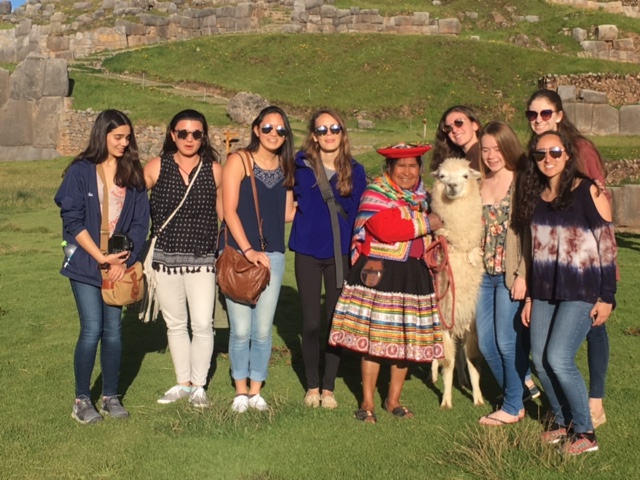