<Back to News
"Catch you later" and "Bon voyage!" 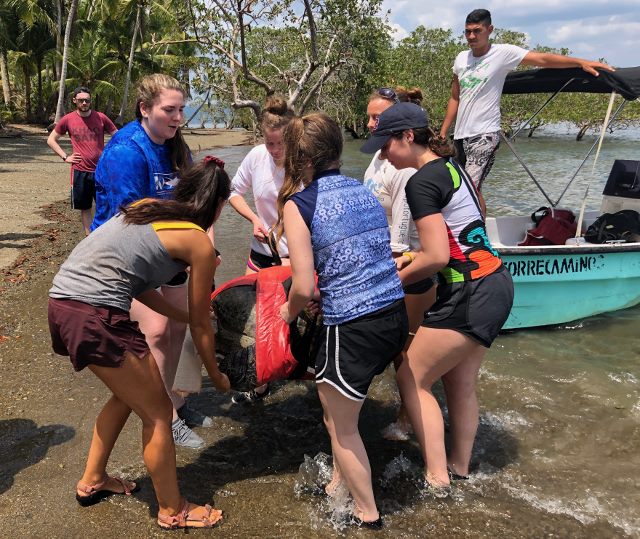 Our eco scientists completed field research in the rainforest of Costa Rica and monitored sea turtles at Playa Blanca.  The students’ efforts were focused on Hawksbill and Easter Pacific Green turtles through in-water studies, data collection and work with rescue and rehabilitation. Work was also completed on the mangrove ecosystems in efforts to restore the tropical trees that thrive in conditions in which most other timber could not thrive. Mangroves are key weapons in fighting climate change because of their ability to store vast amounts of carbon.

The Paris Exchange was hosted by our sister school, Sainte Ursule, where they had a chance to work with the Special Learners in their ULIS program, leading a variety of games and activities. Our New Rochelle students visited many sites including Palais Garnier, home of the Paris Opera. They enjoyed delicious crepes and had their portraits drawn in Montmartre, the former artists' village once inhabited by Picasso and Dalí.

The Australian Exchange first explored Sydney. They climbed the Sydney Harbour Bridge and   discovered Bondi Beach where they enjoyed a swim and viewed the magnificent cliffs. Bondi comes from the Aboriginal word "Boondi" which means "water breaking over rocks."  Then they flew to Toowoomba and were welcomed by St. Ursula College.

Our two immersion groups devoted mornings to language classes and afternoons to local adventures and cultural excursions. The Italian Immersion students in Florence learned about that city’s rich history in gold artistry, dating back to 400BC when the Etruscans reigned. The group had the chance to go to some shops and have a special lesson on leather craft, gold stamping, and gold jewelry. Excursions outside Florence included the beautiful Basilica of St Francis in Assisi where they were treated to breathtaking views from the top of the mountain. The group also went to Rome.  They toured the Sistine Chapel and were amazed by seeing in person the works of Michelangelo as well as the Vatican Museum.

After a morning of Spanish classes, the Spanish Immersion students took a trip out of Seville to the ancient Roman city of Italica. They also visited the beautiful city of Segovia which features the third largest cathedral in Spain.  In Madrid, they had a wonderful visit to the Prado Museum where they saw the works of Francisco Goya and Diego Velazquez. An additional stop on their itinerary was Cordoba, an important Roman city and a major Islamic center in the Middle Ages.

For many more photos and reports on each of these trips, please CLICK HERE.